Chicago’s quarterback drama continues on Sunday as Jay Cutler returns to the starting line-up against the Cleveland Browns, who are at the bottom of the AFC North. (I missed you Jay!) The Bears are 3-0 against their AFC-opposite division in 2013. Can Cutler help to make it a clean sweep and improve the his team’s playoff position? Let’s find out in this Gameday Preview!

What you need to know about the Browns franchise:

They’re in Cleveland. This is pretty much self-explanatory at this point, right? 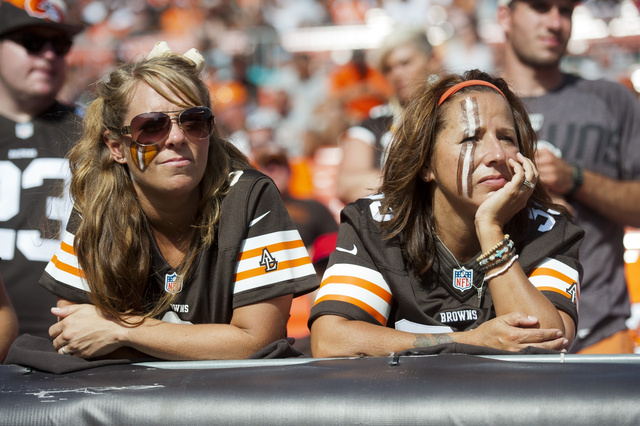 These ladies know what I’m talking about.

This week it’s Jason Campbell. Yep, former Chicago back-up Jason Campbell. Campbell is a bit of a statue in the pocket and isn’t a fan of really pushing the ball downfield, instead opting to control the ball with short to intermediate throws. He’s a respectable back-up quarterback, but as we know from his short stint in Chicago, he’s no Josh McCown. (HA!) But his numbers have improved with the extraordinary development of Cleveland’s offensive player to watch…

Let me run through these numbers for you: 125, 237, 261, 151. Those are the receiving yardage totals for Josh Gordon for the past four games. Translation: he’s a beast. This is one of those wide-outs that gives the Bear secondary fits and is liable for a 200 yard game. Lucky for Chicago, the ancient Willis McGahee is the Browns’ running back, so I wouldn’t be especially concerned about him breaking long runs.

Cornerback Joe Haden is the best defender the Browns’ have, a young shut-down corner with the ability to compete with any receiver the offense can put on the field. But he’s only one man, and the Bears have two 6’3″+ receivers that have a distinct size advantage over the 5’11 Haden. I doubt he’ll be assigned to one particular receiver for the whole game, but Brandon Marshall will be his primary assignment. That leaves Alshon Jeffery with an enviable match-up.

Cleveland started out as a 2.5 point home favorite, but Cutler’s return has swung this line to make Chicago a one point road favorite.

By pretending to cover Josh Gordon? Honestly, the Cleveland offense isn’t some complex enigma. It’s fairly simple. Gordon and tight end Jordan Cameron need to be removed from the equation with jams at the line and dedicated coverage. A little pass rush in Campbell’s face would go a long way as well. If Jay is protected from the likes of Paul Kruger and rookie Barkevious Mingo, he’ll have time to hang the necessary 24-27 points to earn a victory.

Even though a loss would be the most Cutler way of doing things, I’m going to take the Bears on the road here. Cleveland has a tough defense (8th against the pass, 4th against the run), but nothing overwhelming.

With a win the Bears will push their record to 8-6 and be within striking distance of the NFC North title. They’ll need Detroit to slip-up one more time. but hey, it’s the Lions. It could happen.