Destiny is still riling people’s feathers over a month since its release. Gamers can’t decide if they hate or love Bungie’s marketing monster. Well, okay, some have decided. But even some of the players that claim they are annoyed with this game still continue to play it.

Destiny’s lone epic Raid is a surefire example of why players should stick around. Last week, our clan rallied for a second go at the Vault of Glass. Our first attempt the week prior was met with a few frustrations and tactic-shifts, even with an experienced Vaulter in the group. We were thwarted by the final battle with Atheon, whose teleportation shenanigans kept splintering our party. We were under-prepared and under-geared for that fight, which was attempted countless times over the course of a few hours. Surely round two would be different?

If you haven’t heard by now, the Vault of Glass is Destiny at its finest. Where other story missions are chock-full of Peter Dinklebot’s expositions and monologues, the VoG is is dead silent. Besides you and your teammates, that is. And gunfire. Lots of gunfire. Still, it’s way more than just run to point B and shoot all the monsters you can. There’s complex platform jumping. There’s a cave labyrinth, complete with roaming, near-unkillable baddies that can destroy your entire party with just the gaze from their eyes. There’s portal-jumping and relic-chasing. There’s pulse-pounding oracle hunting. There’s ulcer-inducing countdowns to revives as the team deals with the enemy shorthanded.

Most importantly though, there’s cooperation. Intense cooperation. The kind of cooperation I personally haven’t experienced in online gaming since the days of M.A.G. (which I thoroughly enjoyed). I can only imagine the kinds of trial-and-error strategies that were being employed in the raid’s first hours of business. The VoG can be a panic attack waiting to happen if your team isn’t pulling their weight.

Thankfully, our clan’s attempts came long after some of these secrets were revealed and tested. We won, but that still doesn’t mean we made it out unscathed. I died 30 times during our successful run, most of which were from TPK’s where we wiped out due to whatever imminent danger we couldn’t avoid. Still, 30 feels like a low number to me… but then I see guys that beat Destiny’s raid with only a two man fire-team and I’m immediately put back in my place.

With the Vault of Glass, Bungie truly crafted a unique adventure for Destiny enthusiasts, rewarding them for their grinding and looting. Now if the rest of the game could feel as original, we’d have a game everyone would appreciate. In the meantime, I’ll keep going back to the Vault for all that GEAR I haven’t acquired yet. (Ya know, so I can prepare for the next Raid.)

If you haven’t managed to take a stab at the Vault yet, I highly recommend it. If you’re short on friends though (because you’ll need six players on your first go-round), there are several sites that serve that purpose, like That Wizard Came From the Moon and Destiny Tracker. If you need a fireteam, log on, find one, and take down Atheon. You might make a friend in the process. 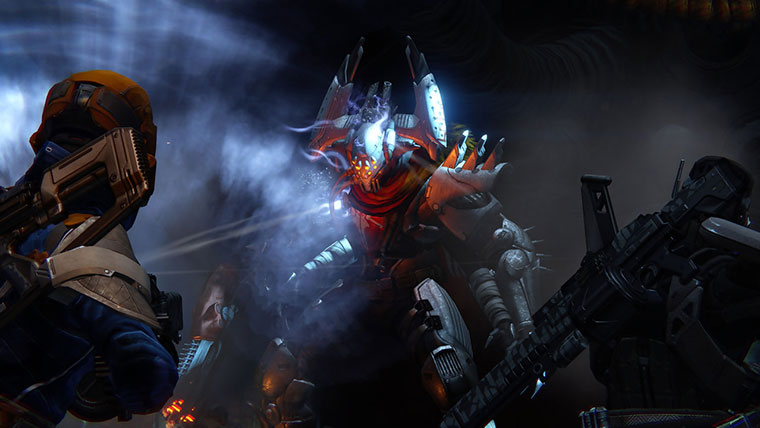 But only after this guy kills you over and over again for an hour.