Good god. The past several days have been overloaded with news regarding the movie world’s various superhero franchises, and it became too much for even this mega-nerd to handle. So a quick recap of what the hell’s been going on seems in order, right?

Don’t worry buddy, I’ve got you.

So Variety broke the hella-crazy news that Robert Downey Jr. had signed on to be in the third Captain America movie, referencing that he’s there to serve as a semi-villain, kicking off “Civil War,” a Marvel Comics event from 2006 with which comic readers are fairly familiar.

That basic gist of Civil War is this: following a super-related disaster, the government decides that all superheroes need to formally register with their office, revealing their secret identities in the process. They’d essentially be super-FED’s. Some heroes, led by Iron Man, are totally down with that. Others, like Captain America, feel that registration is going too far and threatens civil liberties and rights or some stuff. The Pro and Anti teams fight it out for a while, with a few real casualties along the way. (The most eggregious of which is Spider-man’s secret identity, which was revealed to the world and then was magically erased from their minds by the devil. FYI, that sentence is not a joke.) Anyway, the teams get over their shit and team back up afterwards because more huge shit happens which naturally needs more teaming up.

So a lot of fans read Variety’s report and immediately thought:

Let’s get serious for a second.

They might be borrowing the “Civil War” title, but who knows what the hell they’re going to pull from the actual comic storyline? Age of Ultron will look nothing like the AoU comic, so why would Cap 3 be a direct adaptation? It almost can’t be at this point. Example: There are like, seven superheroes and not one of them even has a secret identity! Well, not until Daredevil arrives for his May 2015 Netflix release, a full year before Captain America 3: Back to the Streets is slated to hit theaters. And that’s just one guy. We need more heroes for this to actually matter. And even if there are other supers already existing in that universe, SHIELD’s files were leaked at the end of Cap 2: Electric Boogaloo, so their identities ain’t that secret anymore. So if there’s a feud between Spangly Cap and Iron Britches, it’ll be mostly likely about something else.

So no one needs to get overly angry about a movie that isn’t out for two more years. It’s like us nerds are trying to get ahead of our pissy schedule for all the shit we need to be unnecessarily angry about. (Why am I swearing so much?)

Anywho, RDJ is reportedly getting a hefty-ass payday to be in Cap 3, something along the lines of $40 million plus some of that sexy back-end dough. There are lots of rumors and potential spoilers out there regarding how the new Marvel movie characters will factor into all this and when Thanos will finally show up, but I’ll leave those rumors be for now. (No spoils from me, brah!)

-What has been really interesting about all this is how Sony’s Spider-man may factor into this. We’ve heard there have been talks between Disney and Sony about what it would take to get the web-slinger into the Marvel Cinematic Universe, a move that would probably kill me with excitement. IF Spidey comes over (and that’s a BIG IF), he would be a key cog in any Civil War-type storyline that involved secret identities. I’m too excited to keep thinking about it. 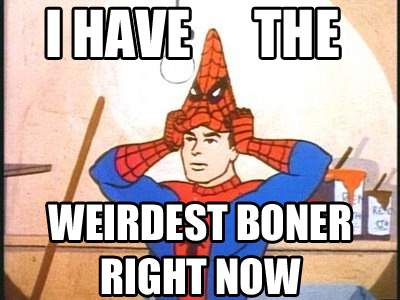 So remember that leaked list of DC’s full movie slate I talked about a few months back? About half of that list is BS or has been thrown out, according to WB’s official movie slate announcement. Here’s the run-down of what’s changed and some of the various associated news.

-We’re getting a Suicide Squad movie in 2016? …Really? This one’s a bit hard for me to understand, but WB’s already courting some heavy-hitters for it, with names like Will Smith, Tom Hardy, Ryan Gosling, and Margot Robbie bandied about the ‘net. Basically the Suicide Squad is a team of super-villains that are sent out on super dangerous black ops missions for a special government agency in exchange for eventual release. Unfortunately, it doesn’t look like fan-favorite Harley Quinn is going to be featured in the movie’s roster. FAIL.

-There’s no more Green Lantern / Flash team-up flick. Instead we’re getting separate movies for each character, one of which has already been cast! Ezra Miller will be The Flash, who (as Barry Allen or Wally West)) is rumored to be popping up in BvS:DoJ (add that to the hefty list of pop-in’s) and will get his own flick in 2018. Then, far into the future of 2020, Green Lantern gets a solo reboot…well, sort of. The character will be featured in Justice League part one and two, in all likelihood. (No actor was cast, but you can bet it won’t be Ryan Reynolds.) This news semi-confirms that the DC TV and movie universes will not be crossing over… at least not in the way Marvel’s do. The Flash and Green Arrow are staying on the small screen… or at least their actors are. I honestly don’t know anymore. DC could still pull whatever they wanted here.

-Joining Miller’s Flash in 2018 is Jason Momoa’s Aquaman, over which I have already begun soiling my shorts. Needless to say, I will no longer be making fun of Aquaman.

This GIF is my favorite.

-Cyborg is getting his own flick! 2020 will see Ray Fisher’s character from BvS:DoJ and the Justice League’s will front a movie that will hopefully not reek of the 90’s the way his comic book counterpart does.

-The Rock is Black Adam! But still no word on who’s playing Shazam, or if the movie doesn’t actually tie into the rest of the DC cinematic universe, as we’ve heard might be the case. 2019 is when that film is scheduled for release.

-Solo flicks for Superman and Batman are “in development.” So that Man of Steel 2 isn’t cemented yet. Nor is the formerly reported “The Batman” which was reported to drop in 2019. (That sounds so far away…. because it is.)

-Wonder Woman is coming in 2017! The Gal Gadot feature is already on my list of things to be overly excited over and love despite how shitty it might be.

Let us know your thoughts on the news! What are you most excited over?