I’ll be brutally honest. I haven’t watched more than two accidental seconds of the 2014 Winter Sochi Olympic disaster. I’m boycotting them. Not just because of their anti-gay propaganda law. Or how Putin is going to exterminate these poor stray pooches. Or because that despite being the most expensive Olympics ever, half the hotels weren’t finished and reports of unlivable conditions permeated the internet. Or because of the rampant hackery of every connected electronic, mostly coming from the Russian government, who is monitoring devices for all the non-positive reports coming from journalists. Or how some of the events are poorly put together, resulting in injuries to athletes or the most famous snowboarder to pulling out of the slopestyle event.

I mean, those are some of the reasons, sure. But most of all I’m not watching these Olympics because they’re boring. The Winter Olympics are inferior to the Summer editions. You can argue that Olympic hockey (superior to the NHL) is more entertaining than Olympic basketball, fine. It took forever, but snowboarding seems here to stay, and rightly so. And sure, the luge is badass. But in my opinion…

I mean, look at this list of events! Summer just has that much more to offer. I haven’t even gotten to fencing, soccer, sailing, or anything equestrian in nature. And besides for the events being lackluster or not as diverse, these Sochi games have another issue. With every Olympics we see new stars rise to become Subway endorsers and get on Wheaties boxes as already famous competitors make their latest (or sometimes last) go-round at the events. This Olympics is lacking the latter. Without Lindsey Vonn (tore ACL during her training/recovery from her last injury), the American star-power felt severely underwhelming.

That is, until Sunday night, when a new meme was born.

Yes. That happened. AND IT’S AWESOME. American figure-skating hopeful Ashley Wagner saw a lower-than-anticipated score following her routine, which dropped her into fourth place and out of medal contention. Wagner felt a bit of heat before the games began because she was selected over Mirai Nagasu, who had placed above Wagner in the latest National competition. The US Figure Skating Association felt that Wagner’s previous first place finishes at the 2012 and 2013 National Championships made her a better choice over Nagasu, and I can’t disagree. Wagner was regarded as one of our best skaters, so one bad event shouldn’t immediately disqualify her from competing.

So after the firestorm and this latest low score, you can imagine Wagner’s feelings. But thankfully, none of us have to imagine it. Because her face and the subsequent call of “bullshit” gives us everything we need to know.

I don’t need my figure skaters to always be dainty expressions of class and character. It’s nice to see that some of them are human beings with legitimate yet subdued emotional reactions. And by legitimate I do NOT mean bawling like a 14-year old girl. (Unless of course, they are a 14-year old girl, in which case bawl away.) Wagner didn’t flip out or start throwing F-bombs at the judges (hey Joakim Noah), but her aside to whoever automatically gives her a credible personality. These professionals (and that term aimed at skaters or lugers is drastically different than the idea of professional basketball players, who get PAID) train for years in order to compete in (hopefully) one or two of these events, and it an all come down to one dude overlooking the fact that the skater from Japan fell down during her routine.

She actually gets perturbed when she loses! She hasn’t become a tool of the corporate athletic machine which doesn’t allow these fiery competitors to express true emotions, instead laying out cliches and platitudes when they haven’t “done their best.” And of course it helps NBC that they put her face right on camera while the scores are announced like it’s the Oscars. Wagner and teammate Gracie Gold have since helped the US to a bronze in the Team Ice Free Dance, meaning Ash won’t be going home empty-handed.  Ashley Wagner is now my favorite winter Olympian, and it has nothing to do with her being an attractive blonde female in her twenties.

…Though I’ll admit that doesn’t hurt. 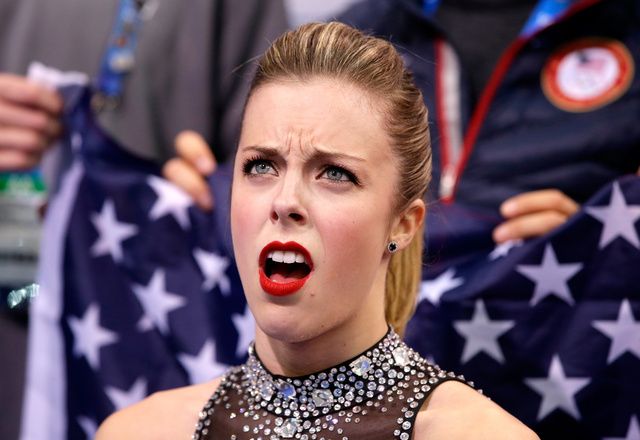 If you’re making this face, you didn’t take the joke.

Have you watched any of the Olympics? Was Wagner robbed? Is she an entitled brat? Or do you like your athletes a little on the spicy side? Let us know!