Following up her 2007 debut Little Voice and 2010 sophomore effort Kaleidoscope Heart, piano songstress Sara Bareilles released her newest full-length album on July 13th, entitled The Blessed Unrest. I’m happy to report that the twelve tracks (fourteen on the Target exclusive version) add up to an album worthy of her developing catalog. 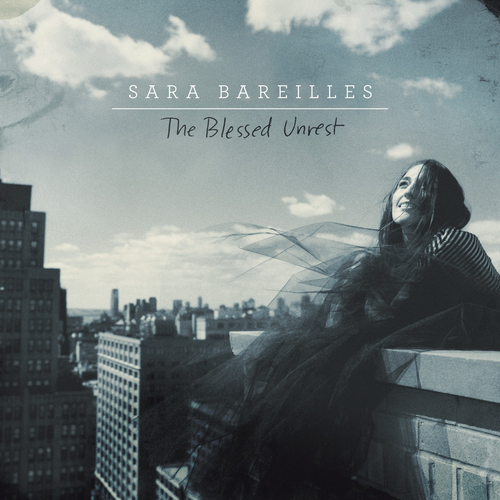 Here’s some sweet album cover action for you.

If you’ve been paying attention to the pop stations, you’ll know that “Brave” is the first single off this new album. It screams of Bareilles’ piano hooks and customary sass. (Seriously. She’s McSassy. It’s delightful.) If the song doesn’t snag your attention, you probably shouldn’t be listening to Sara Bareilles. Just sayin’.

There are certainly some tonal shifts in a few of the tracks off TBU. While it may start off typical of some Bareilles songs with a thoughtful piano prelude, “Hercules” turns into a  emotional distress call. Her pleading to be a ‘warrior” will resonate with anyone fallen on harder times. Backed by a plucking cello, “I Choose You” is just adorable. Bareilles is optimistic and anxious, her pledges filling out this soft-spoken love letter. The snappy “Little Black Dress” addresses how a favorite song and the right outfit can help you forget about all your problems. (I think it might be a lady thing. Ya know, the dress and all.)

My favorite song on the album is without a doubt the pounding rhythm that is “Eden.” The refrain’s taut and fast-paced guitar strums are near-perfect for pushing through a grinding run, broken up by Bareilles’ perfectly harmonized verses. There’s definitely some excellent use of “drum tech” on this track as well. (Thanks liner notes! I can only assume that means digital percussion, judging from the bleepy-bloops I deciphered underneath the legitimate drums.) I honestly haven’t gotten enough of this song since I heard it the first time.

On the Target exclusive edition you can find two additional tracks in “Beautiful Girl” and “Parking Lot.” The first is as simplistic as it gets, with Bareilles’ vocals on top of her ukelele playing. This track is all about feminine self-worth and image, so while I didn’t immediately relate to it, it’s certainly a pretty and mellow diddy. “Parking Lot” wraps the album with up-tempo attitude. (She even says “fuck.” Get it gurl.) Are they worth the in-store purchase? I’d say yes, but I clearly have a bias towards the singer at this point. If you’re picking up the disc anyway, I’d make the trip to Target. If digital is your thing, there are ways to hunt down the exclusive tracks. (I won’t make mention of it here. You DIGITAL THIEF.)

Do a few tracks off The Blessed Unrest end up sounding similar to those you have heard before? Well, yeah. But it’s only natural that a single voice against a piano with generally the same accompanying instruments may begin to feel too similar in a third go-round. Still, Sara’s well-crafted lyrics gave me more than enough to differentiate one tune from another.

Fans of Sara Bareilles will undoubtedly have no issues with her latest release. With the success she experienced with her first two albums, it would have been easy for Bareilles to mail-in another poppy effort, but I came away more than contented with the chances she took on various tracks. The Blessed Unrest has earned Sara a spot in my super-coveted (for realz) list of artists whose physical albums I will purchase. (Take THAT digital age!)

If you’re looking for just fun piano pop, this album may leave you wanting. Sara clearly made a choice to mix in a solid amount of slowed heartfelt tracks. It’s a complete experience, not just a glimpse. And I’m all for it.