Once a western garbage fest that couldn’t even get an 8-8 team as its champion, the NFC West has rebounded to become the gold standard of NFL divisions. Last season, its weakest link (Rams) went 7-9, while its top seeded Seahawks went on to claim the Lombardi trophy after beating their rival 49ers in the NFC title game. All while the Cardinals surged to a 10-6 record and a near-playoff berth. Can the West repeat their success? Or will some of its inhabitants fall back to Earth? Time for crappy predictions!!!

Pete Carroll’s bunch of angry passed-overs pummeled their way to a Super Bowl win in 2013, and there’s nary a reason to feel as if things will be that much worse for the coming season. There’s a chance Russell Wilson goes through a decline, but it’s more likely that he ratchets it up a notch. His confidence has to be at an all-time high. (Last year he may have been dealing with a wife that may have cheated on him with Golden Tate. May have.) He’s been crisp in the preseason, making defenses look just silly on every drive. I’m looking forward to a maybe whole year of a healthy Percy Harvin, because he makes such a difference for this team on offense and special teams. He’ll also free coverage up for Jermaine Kearse and Doug Baldwin to step-up and fill Tate’s now vacant shoes. Injuries on the offensive line are still a concern, but Marshawn Lynch doesn’t care who’s in front of him. That guy is still a mauler. His running sets up play-action for Wilson, and is a huge reason for this offense’s success. 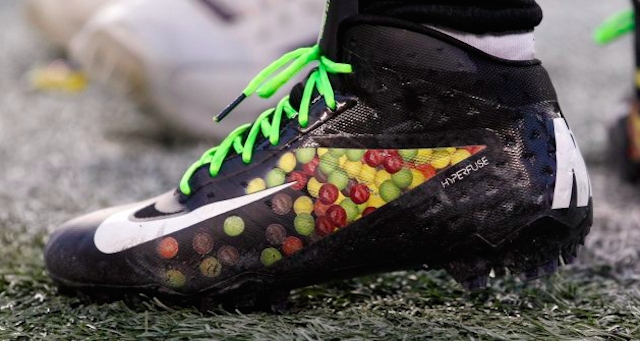 He also needs to wear these shoes every game. EVERY. GAME.

On the other side of the ball, there’s even less to critique. That Seahawk secondary is intimidating as hell. And now Richard Sherman will be talking up a storm and trying to prove he’s worth the mega-deal he just banked.They may have let Brandon Browner walk in free agency, but Carroll will have a plan for a substitute. Earl Thomas and Kam Chancellor are still patrolling the defensive backfield, so receivers will still be scared shitless of going over the middle. The defensive line brought back Michael Bennett to rush opposite Cliff Avril, but they might not have as much depth as in past seasons. Seattle’s deep at linebacker, and they can all make impact plays. (Like Malcolm Smith, who doesn’t even start and was the Super Bowl MVP.) I’d piddle if I were an opposing offensive coordinator.

Non-Record Prediction: FOX will send Erin Andrews to interview Richard Sherman after EVERY Seahawk game. They have no other idea on how to garner better ratings.

They’ll be a favorite all year and shouldn’t have any trouble securing home field advantage.

There’s been a lot of praise heaped on San Fran in recent years, but there are actually some red flags for this season’s iteration of the Niners. There’s a definite division between their petulant coach and power-hungry GM. Is Colin Kaepernick as good as advertised? Or will he just plateau as a QB that isn’t as accurate as everyone hopes? Frank Gore has to be wearing down, right? Their starting right guard was holding out until last Tuesday. If Michael Crabtree or Vernon Davis go down with an injury again, who is a legitimate receiving threat? And those questions are just on the freaking offense!

NaVorro Bowman, who can be argued is the best linebacker on the team, will start the season the PUP list, which means he’s not back until the seventh game of the season. That’s six games that the Niners will have a major hole in the middle of their defense. Patrick Willis is a great downfield tackler, but his pass coverage isn’t as good as Bowman’s. Starting right defensive end Ray McDonald was arrested on domestic violence charges before the season started, leaving him open for a wicked six game suspension at some point. I also don’t trust their corners. Or Antoine Bethea to not fuck up in pass coverage.

Non-Record Prediction: In a show of solidarity for their coach, the entire team will wear khakis to a game. Oh, and their coach will be put in an insane asylum. I should mention that part.

Maybe it’s not as bad as I made out. They may still be second fiddle in the division, but at least they have that new stadium everyone loves!

If the Cardinals have any shot to win ten games again this season, it’ll be because they hawk some turnovers and Carson Palmer doesn’t throw another 22 interceptions. God, what is it with the NFL and thinking this guy is still good? His blindside will at least be protected this season by left tackle Jared Veldheer, who escaped the black hole of Oakland. That will go a long way in improving the line’s performance, but who will run the ball behind them? Andre Ellington? I don’t trust that dude yet. A few years ago Larry Fitzgerald was easily the best receiver in football, but now he’s a slower, more expensive version of that All-Pro. Michael Floyd actually led the team in yards last season, leading some to desire Fitz’s kicking to the curb. Oh how we forget. But hey, the defense was good last year, right?

There’s no Darnell Docket anchoring the defensive line this season after an ACL tear in the preseason prematurely ended his year. Linebacker Karlos Dansby left via free agency. Defensive tackle Daryl Washington is suspended for the entire season thanks to whatever substance he’s been abusing. (WHY CAN’T WE LEAVE THE SUBSTANCES ALONE?) I was watching a Cardinal preseason game (I’m sick, I know) and a commentator (perhaps Collinsworth) mentioned how the Cardinals were “really going to rely on” defensive end John Abraham. You know, 36-year old John Abraham. That can only play 20 downs a game. That seems like a weak contingency plan. Regardless, the Cardinal secondary is pretty awesome thanks to its pair of athletic corners. Patrick Peterson and Antonio Cromartie will dominate most receiver pairings. Unfortunately they’ll be chasing receivers for ten seconds because their pass rush is non-existent.

Non-Record Prediction: Patrick Peterson will be used as a corner, wide receiver, running back, quarterback, kick returner, and punt returner this season.

Just a slight step backwards. Maybe you should think about getting rid of that ginger quarterback?

Wow. This is team is STILL waiting on Sam Bradford to A-finish a season and B-become above average. They’ve already failed on that first part for the 2014 season. Bradford went down in the Rams’ third preseason outing, tearing the ACL in his left knee, which is the same ACL he tore last season. So instead of Sam Bradford the Rams will trot out… Shaun Hill? Oh god. That just sounds terrible. Hill will at least be to count on rookie left tackle Greg Robinson to be well… a rookie lineman. He’s got potential, which means he could give up 28 sacks this season. But hey, that was a free pick from Washington in that awesome RG3 trade the Rams are probably regretting right now. Helping Hill out this season? A group of young-ass wide receivers that have to “learn how to be an NFL player” from the newly-signed Kenny Britt. Kenny. Fucking. Britt. This is the guy who’s been suspended for multiple run-in’s with the law and likely posted a personal hardcore sex clip to Instagram once. (That link is VERY NSFW, just in case “hardcore sex clip” didn’t clue you in.)

What the Rams do have going for them is an intimidating as hell defensive line rotation. It’s just scary as shit. They already had Robert Quinn and Chris Long, but they drafted Aaron Donald 12th overall to disrupt offenses from the defensive tackle position. It almost doesn’t mater that their secondary is mediocre or that their linebackers are either super old or super raw. Their defense will be statistically better than the whole of their parts would suggest. But their record? It’ll reflect every bit of this team.

I was thinking a few wins higher until Bradford went down, but I’m not sure they were .500 caliber anyway. Tough shits. This is karma for cutting Michael Sam.

And that’s it! The last divisional preview! Come on back shortly for a preview of tonight’s opener! YAY FOOTBALL!