2013 saw the AFC gain a semblance of competitiveness thanks to the rise of the Chiefs. However, the whole conference suffered when the Broncos got trounced in the Super Bowl. Now they’re back for another run. Is the rest of the AFC West able to challenge their reign? Or is this just another year of Denver dominance? Time to find out! Or… find out predictions. Whatever. There are a lot of these things to write. I can’t deal with your “context” right now.

The 2013 Broncos’ Super Bowl collapse has to go down as one of the most genuinely disappointing performances of all time. (Right after those near-perfect Patriots.) Now, instead of loving Manning for all he’s done and brought to the game, pundits and experts are back to asking if we can trust him to “win the big one.” Manning’s been great the past few years in Denver, but let’s not pretend his arm is anything spectacular. This offense is built on rhythm, timing, and patterns that allow the receivers to run after the catch. Manning’s failing arm strength won’t allow for deep bombs down the field anymore (not that he was especially known for those anyway).

Following the initial nausea stemming from a game that crappy, the Broncos used their 2014 cap space to full effect, bringing in a ton of free agents aimed at solidifying a defense that was disguised by a tremendous offense. DeMarcus Ware was signed to a deal, with GM John Elway hoping that the former Cowboy can re-live some of his Dallas glory years coming off the edge opposite Von Miller. If he can get anywhere near that level, the Broncos will be outrageously better. The likelihood is that he peters out at the season draws on. The secondary went through a significant makeover with the additions of corner Aquib Talib and safety T.J. Ward. Talib can man-up with the best receivers in the AFC and Ward can help ensure no more bombs get past him (looking at you Rahim Moore).

That vaunted offense I was speaking of? It’s going to be slightly less intimidating this season, thanks to a Wes Welker suspension for the first four games and the exit of Eric Decker via free agency. But let’s face it, Welker was likely going to be concussed and miss one of those games anyway. Those losses mean Demaryius Thomas and new guy Emmanuel Sanders are going to see a few more Manning wobblers their way. But don’t forget about Julius Thomas, who had 65 catches of his own last season and figures to get the bulk of Decker’s red zone targets. Montee Ball is taking over as the lead running back, so everyone should be prepped to see at least 12 fumbles. John Fox is gonna ride that pony all year long… unless he stops blocking for Peyton. Then all bets are off.

Non-Record Prediction: We’ll be uselessly arguing if the Broncos should rest their starters by week 13.

Maybe the extra loss will challenge them to fail in the playoffs even harder!

AH geeze. This team still exists? Fine. Here goes… The 2013 Chiefs shocked everyone last year with a rebound from the worst record in the league in 2012 to playoff “threat.” And by threat I of course mean they shat the bed by surrendering a 700-point lead and allowing Andrew Luck and the freakin’ Colts to pull off the craziest comeback in the history of football. This year they’re serious… about being even more decentish. They just gave a ton of guaranteed money to Alex Smith, a quarterback I firmly believe is average at best. This was a passing offense that ranked 24th in the league, so naturally you’d think the Chiefs would upgrade at receiver, in order to best help their quarterback? Nah. They’re still just hoping Dwayne Bowe garners 2,000 yards and that Donnie Avery grew hands in the offseason. This team’s aspirations are still utterly tied to the rushing of Jamaal Charles. Charles has second year pro Knile Davis and rookie De’Anthony Thomas backing him up, but he’s still the workhorse this team needs, not the one it deserves. 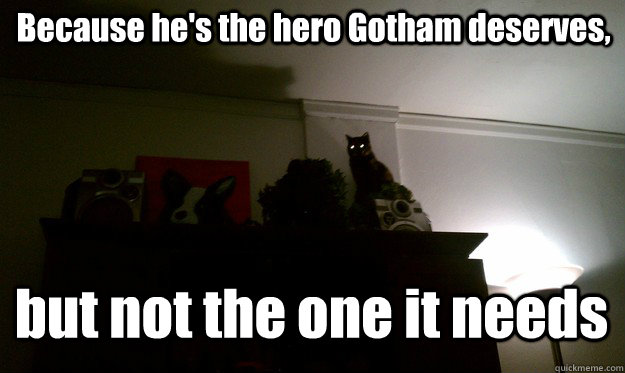 TWO Batman references? This is getting out of hand…

Non-Record Prediction: Andy Reid will swallow a football whole when a “smart” throw-away by Alex Smith finds its way into his mouth.

Another season of Phil Rivers fuckin’ it up all over the place. I’m so tired of talking about this team. They’re the Dallas Cowboys of the AFC, and that is not a compliment. They used to be the most hyped team in the crappiest division, but now they can’t even claim that anymore. Philip Rivers angers the fuck out of me, mostly because he’s a redneck douchebag who claims he doesn’t curse on the field while throwing ridiculous interceptions and becoming a father for the 13th time. (For the record, he has seven kids.) Last season Keenan Allen entered the league and racked up over 1,000 receiving yards and eight TD’s to go with them. But Rivers will need more than Allen to make the playoffs this season. Antonio Gates is never healthy for more than three quarters at a time. Ryan Mathews isn’t much better, and he fumbles to boot. Danny Woodhead is “scrappy” which should really translate to “small white guy who can’t get more than four yards a carry.” I know because that would be my defining trait were I to play in the NFL. And we get to watch King Dunlap play another season of left tackle. This means more lovable Rivers strip-sacks are on the way!

Look! He doesn’t even need to get touched! He’s the best fumbler.

On the other side of the ball, I’d like to say the Chargers don’t have a shitty secondary. They brought in Brandon Flowers (after the Chiefs cut him for some reason) to team with safety Eric Weddle, who is creeping dangerous close to aged white guy years. …Ugh. I’ve already lost interest in further discussions of this team. Just get to the predictions already!

Non-Record Prediction: Philip Rivers will become a father to two more surely-doomed daughters. They will be named Tammy-Lynn and Jessie-Holly.

My NFL seasons are more enjoyable when the Cowboys and Chargers are losing.

Did anyone else note how utterly disappointing the Raiders’ offseason was? (Did anyone even pay attention to it?) They backed out of the deal they gave Rodger Saffold, who had some pre-existing back injury that scared the hell out of them. They RE-SIGNED Darren “Knee Sprain”  McFadden and brought in the broken tree trunk legs of Maurice Jones-Drew. Together that should amount to about 7 1/2 healthy games at running back. Then they traded away a sixth round pick to acquire the King of Pick Six’s, Matt Schaub, who will allow rookie Derek Carr to ride the bench before turning into the second coming of his older brother. Or at least that would have been the situation until the Raiders went all “rebel” on us and decided Carr was going to start the season. We’ve got a learning curve here folks. Hang onto something. And Donald Penn was brought in to totally make up for the fact that left tackle Jared Veldheer left in free agency. FOOLED YOU! It’s a two-year deal for an aging mediocre veteran. Suck it Oakland. Lamarr Houston also bolted the Raidas, leaving a glaring need at defensive end. Oh, and for some reason they signed Charles Woodson to play safety. Did anyone else think he should still be playing football? No? Okay, good. Oakland was stuck in salary cap hell for the past few seasons, so I was intrigued what would happen when GM Reggie McKenzie actually had space to sign “his guys.” SPOILER ALERT: Same old Raiders ineptitude.

Non-Record Prediction: Dennis Allen is fired mid-season and goes back to finish the seventh grade.

So the answer is no. No team is challenging the Broncos this year. The Chiefs aren’t a “dark horse,” no matter what anyone claims. There’s only ONE Dark Horse.

Thanks for reading! Come back soon for the last division preview: the NFC West, home of the Super Bowl Champion Seattle Seahawks!