The AFC South was garbage last season. Truly hot garbage. Outside of the Colts (who had an inflated record from playing their Southern kin), the other three teams won a combined thirteen games. Is 2014 the year this division starts to right the ship? Or will Houston and Jacksonville manage to scrape the bottom for another season? Let’s get down and dirty in the AFC South.

Those plucky Colts are back and are ChuckStrong again. Or something. I don’t know. This team likes to use a lot of catchphrases on t-shirts in order to spice up their preseasons and rally themselves for another year of hoping Andrew Luck can throw 400 touchdowns. Honestly, these guys would have been the least impressive 11-5 team in the league if it wasn’t for the Chiefs. Onto this year! …They didn’t have a first round draft pick. Instead of saving it, they used it to acquire Trent Richardson, who ran for 458 yards last season, his sophomore year in the NFL. I’ve already decided he’s a terrible waste of space. The Colts tried to bring in some other weapons for Luck, but they’re not much better. Receiver Hakeem Nicks was signed to bolster a receiving corps that struggled when Reggie Wayne went out of the line-up with an ACL tear, because T.Y. Hilton can’t win every game single-handedly, unless every game is against the Chiefs. Unfortunately, like his ex-Giant buddy Ahmad Bradshaw (who backs up Richardson), Nicks may never play five consecutive games again. I’m not even sure he has knees. All this for a team that ranked only 17th in passing yards last season. which is surprising.

Defensively, the Colts are still overly soft, just like they were in the glorious Manning years. Their conversion to a 3-4 scheme is still in progress, lacking the interior pieces that are vital to that scheme. Robert Mathis was a stud last year, racking up the most sacks in the NFL… which of course means he was taking a PED. Mathis was suspended for the team’s first four games for taking Clomid, which he claims was because he and his wife were trying to have a baby. (Which would be their third.) These are the games he’s missing: at the Broncos, home for the Eagles, at Jacksonville, and home for Tennessee. With or without Mathis, the Colts probably go 2-2 anyway, so I’m not overly concerned. GM Ryan Grigson re-signed Vontae Davis before the corner could go out and oversaturate the market, so I guess that was a nice move. Outside of Davis their most significant deals were with their kicker and punter. That’s what I think of the 2014 Colts.

Non-Record Prediction: A fourth string corner will recover from a cold, leading the team to design #UsAgainstTheFlu t-shirts before their next game. No one will point out the difference between a cold and the flu, instead choosing to “enjoy the uplifting story.”

No amount of slogans or easy wins will make me buy into this team.

Every year I start researching the the Titans, I begin with “who the hell is on this roster again?” The team is that uninteresting. They’re the vanilla of the AFC. This year, there are actually a few changes worth noting. New coach Ken Whisenhunt is here to milk QB Jake Locker for all the mediocrity he can muster. But he’ll do so without Kenny Britt, the wide receiver who actually had some talent but never could stop being a dick. And the Titans released Chris Johnson, so they won’t be over-paying him to rush for 862 yards with every 31st touch being semi-exciting. Wait, he counts for $4 million in dead money against the cap? Shit. They drafted one of the best offensive tackles in the class in Taylor Lewan… but he might have to sit for a year behind Michael Roos or Michael “Stop Calling Me Blindside” Oher. Yikes. Forethought much? Their defense is changing to a 3-4 in an effort to stop broadcasting their edge rushes to opposing offenses. And yes, their defense is boring as shit too. Their season entirely depends on Jake Locker being healthy for 12-14 games and tossing the rock to third year receiver Kendall Wright, who has a large load to shoulder this season. The Titans also signed Dexter McCluster, who is the only logical yet middling replacement for Chris Johnson. Between McClusterFuck and Johnson’s dead money, what did the Titans really accomplish? Oh, and McCluster is somehow behind Shonn Greene on the running back depth chart. I don’t comprehend anything the Titans are doing. I think they’re loading up on offensive linemen. It’s a new strategy, at least.

This is just who the Titans are. They’re the perfect representation of a below average team.

The Jaguars won 132 straight games to end the 2013 regular season, or that’s what you might think if you’re judging the excitedness of the fan base or the preseason hype surrounding Gus Bradley’s squad of “hard workers.” Yes, they managed to hoodwink the 49ers into giving them a draft pick for Blaine Gabbert, but a 2015 sixth round pick isn’t going to fix this team’s woes. The franchise is trying again at this whole “quarterback” thing, having drafted Blake Bortles third overall. This time around, they’re going to let the rookie sit, instead of throwing him to the wolves like Gabbert. Chad Henne will start the season under center, but we’ll see how long that lasts. It was recently reported that more Fantasy Football players had Tim Tebow on their rosters than Henne. That doesn’t surprise me at all! People would rather have Tebow as a joke than seriously be depending on Henne for any reason whatsoever. Jacksonville, take note.

As far as the team’s offensive firepower goes? It’s not pretty. We might never see Justin Blackmon on an NFL field again if he can’t knock off the drugs. So the Jags drafted Marqise Lee and Allen Robinson to be outside targets. And they signed Toby Gerhart to play running back… which is somehow supposed to help their 31st ranked rushing attack. …Riiight. The left side of the offensive line is pretty good though? I mean, if Luke Joeckel can last a full season and Zane Beadles doesn’t take a Florida vacation after getting PAID. Ugh. Maybe the defense is serviceable? I mean, Bradley’s trying to make this defense the Southeastern Seahawks, bringing in Cris Clemons and Red Bryant from Seattle to rush from the edges. I’m not buying it though. Any defense which still features Paul Posluszny as its middle linebacker isn’t going to be anything more than “okay.”

Non-Record Prediction: The Jaguars will learn what a tough (i.e. trudging) runner Gerhart is when he has 34 yards on 113 carries in five games.

They had the number one pick in the draft. Their new head coach, Bill O’Brien was the offensive coordinator for Tom Brady. They’re only a year removed from a playoff appearance and have a glut of talented pieces. The Texans parlayed that advantageous position into… Ryan Fitzpatrick and Tom Savage? OH COME ON. YOU’RE NOT EVEN TRYING NOW. (Late addition: the Texans traded a conditional sixth rounder to New England for… Ryan Mallett! He’s a WINNAH!) Fitz is a solid back-up that’s bounced around as teams tried to capture and harness his “streakiness” to couple with his Harvard smahts. No one has. Houston’s number one pick was spent on Jadeveon Clowney, who will learn from J.J Watt how to terrorize quarterbacks everywhere. That defensive line is frightening. Everywhere else? No so much. Arian Foster is another year older at age 28, which means his running back age is 632. There’s no more Ben Tate backing him up, so the Texans are dependent on an unlikely uptick in Foster’s production. DeAndre Hopkins proved to be a capable number two receiver, but Andre Johnson is barely even a one anymore when he’s not busy being disgruntled. Brooks Reed and Brian Cushing are just twelve missed starts waiting to happen. D.J. Swearinger is primed to take the next step as an impact safety, but he’s going to busy making up for other missed tackles.

Oh, and their quarterback is Ryan Fitzpatrick. We talked about that, right?

Non-Record Prediction: Jadeveon Clowney will make continual highlight tackles and stops on defense, yet his motor will be questioned every week by Skip Bayless on First Take. 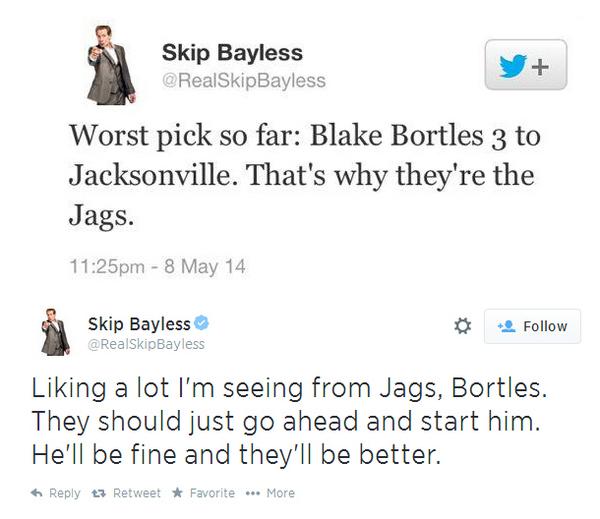 His head might explode this season. One can only hope.

Yeah… a lot of trash is floating around in the AFC South pool. It’s not pretty. But there are more exciting divisions to be previewed! I promise.