Does everyone feel better now? Are you satisfied with your quarterback? Can we hold off on the conniptions this week?

No? Ugh. Fine. Be that way. I’m still going to review the fudge out of this game. The Bears came out Thursday night and knocked around the San Diego Chargers to find their first (mostly meaningless) win of the preseason. 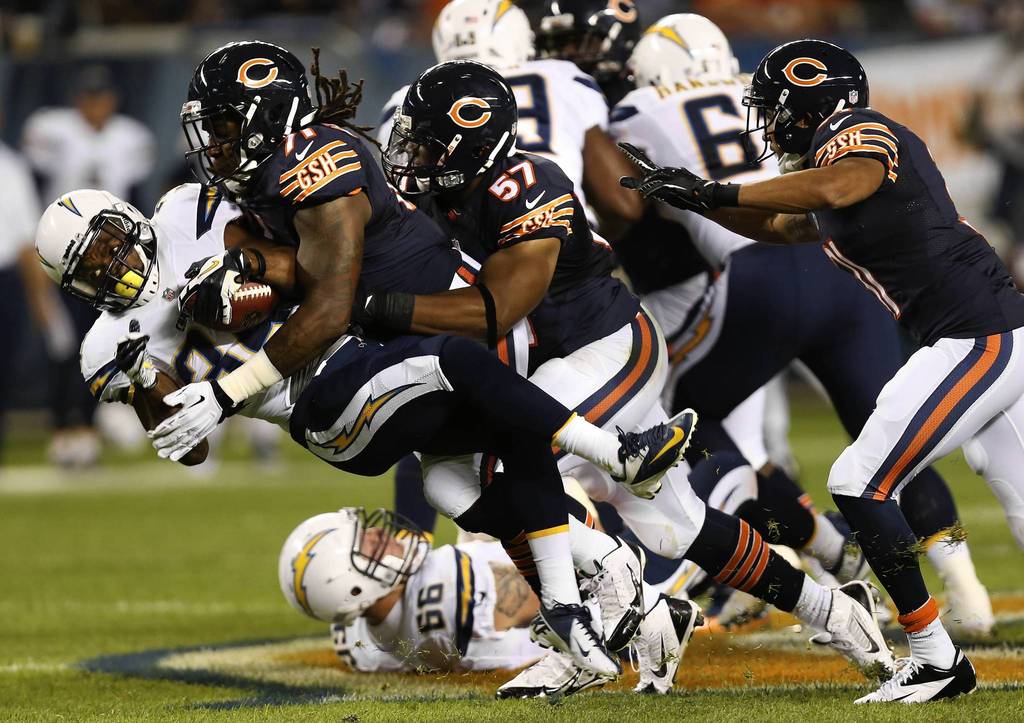 The first drive was a familiar comedy of errors for Cutler and the Bears. He was sacked and fumbled the ball. With a recovery, the Bears found themselves in a third-and-long situation. That resulted in a coverage sack. So two sacks on three plays. Woo. Luckily it got better from there.

We saw how this West Coast offense will move the ball, with quick drops from Cutler and even quicker passes. These short and intermediate-level routes are designed to keep the chains moving. Cutler may have only targeted Marshall Thursday night, but I’m not sure it really matters. Every defense already knows these two love each other, so all they’re getting is unnecessary film. It was great to see Jay Cutler show off some skillz. He got to roll out on a naked bootleg (so hot). Later he drew the defense offsides with a hard count. It was a solid quarter or so for the embattled QB.

It wasn’t all the Jay-Show though. (Why isn’t that a thing.) Matt Forte broke off a 58-yard run, inflating the stats of his eight carries. He was freed up by a key block by a pulling Jermon Bushrod. Jay followed up that run by staring down Brandon Marshall in the front corner of the endzone and finding him on the up-and-outside pattern. On a later drive, Forte scored a red-zone touchdown behind the right side of the offensive line. You know, that right side that started two rookies.

Of those rookies, first rounder Kyle Long brought the ‘roids Thursday night. That guy was all up and pancaking bitches throughout the game. He showed off solid footwork, a strong lower base, and tenacity I haven’t seen from a Bear lineman in some time. He looks like he wants to hit people. Hard. His performance got a “That’s the stuff” from Marc Trestman as Long came off the field. It’s a near give-in that Long will be the starter at right guard when the season begins. Any time a linemen gets this much positive film from one game, it’s impressive.

Defensively, the Bears front line produced plenty of pressure on the Charger QB’s throughout the night. Corey Wootton beat rookie D.J. Fluker to the inside for a sack on Philip Rivers. Shea McClellin got in on the fun, blowing past tackle Max Starks for the sack/fumble of Rivers. Nate Collins sacked Rivers from his defensive tackle spot, which is a great sign for a member of the DT rotation. With Henry Melton out with a concussion, Collins figured to see a lot more game action in the preseason. And I love seeing Philip Rivers knocked on his ass. It is a sight to behold.

Chris Conte pulled in an interception off a tip from some Charger (whoever), and trapped it against the ground. It should have been incomplete, but the refs called it a pick anyway. Big whoop.  Cutler whipped it into tight double coverage deep over the middle and got picked off on the very next play. No harm no foul. I don’t even mind the interception. It happens. That’s my ballsy QB. In preseason.

Let’s just be honest here. The Chargers were hot garbage. They muffed punts, botched snaps, and couldn’t protect. So let us not hold a victory parade for defeating inferior foes. It was 20-7 at halftime, thanks to four Charger turnovers. Sure, Mel Tucker’s defense will be good, but they had a lot of help on this night.

And while I was returning from the movies (before I watched the entire game), this exchange happened with Matt, one of my few close friends that can talk the pigskin. Because what else am I going to entertain you with? MORE DETAILS OF A PRESEASON GAME?

So without further ado, I give you: Texts from Matt. 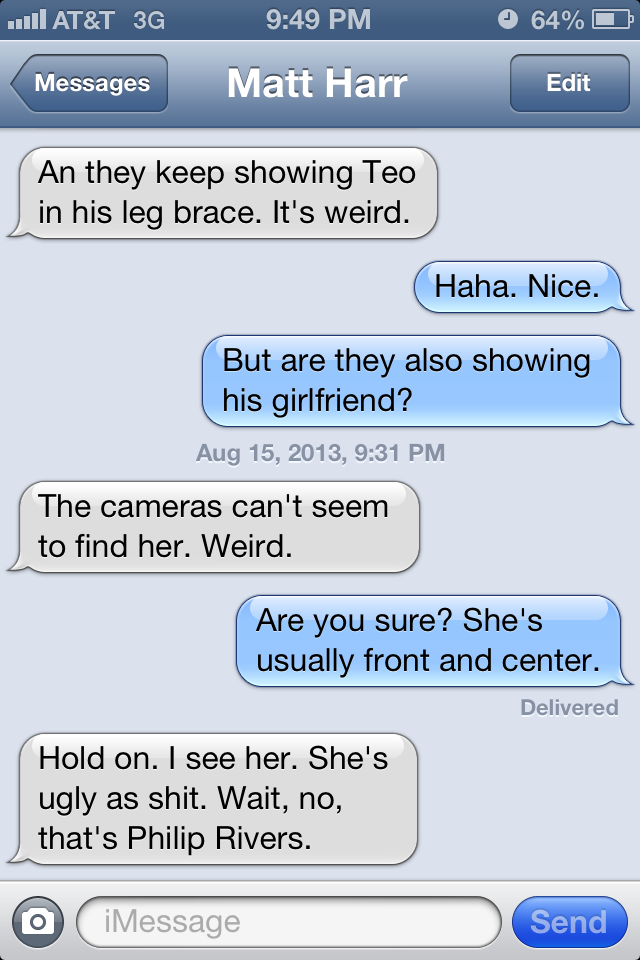 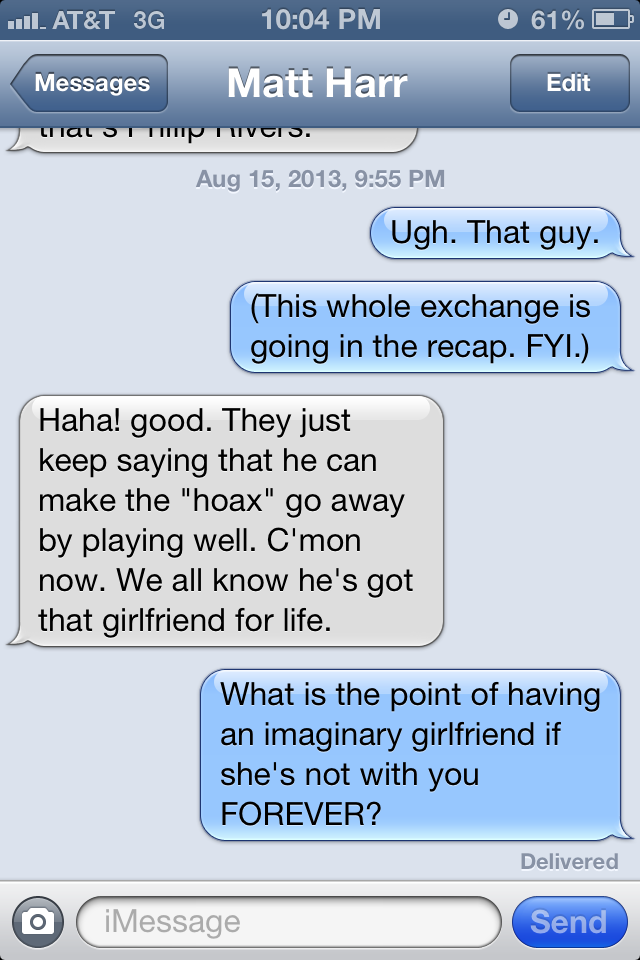 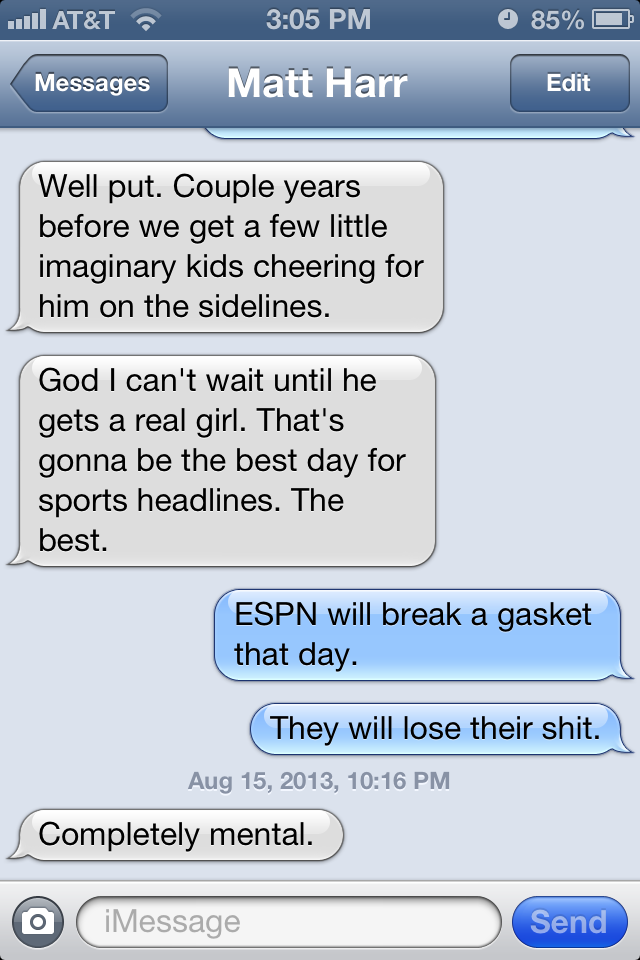 -Third string QB Matt Blanchard broke his hand, leading to the signing of Jordan Palmer. (Whom crazy footballers like me will know as Carson Palmer’s younger brother.) It’s a disappointing injury for the rookie Blanchard, who was quietly showing off some real talent during camp and the preseason.

-Rookie Michael Ford flashed some moves on a return in the third, but definitely doesn’t have Hester-like afterburners. Dude got caught before he hit the goal line. Still, a 100-yard return is nothing to scoff at. (So stop scoffing.)

-Speaking of Devin “Never Again at Wide Receiver” Hester, he found a little bit of daylight on the game’s first kick return. I don’t need him to score four touchdowns this season, but he must be a factor again when it comes to field position.

-Rookie Jonathan Bostic continued to get into the highlight reels with a wham early in the third quarter, causing an incompletion. But he was caught out of position in pass coverage later on the drive, which led to San Diego’s second touchdown over the middle.

-Lance Briggs was still in the game early in the second quarter. Clearly Trestman wanted him in there to get more reps calling the defenses.

No more for this game! Chicago will be in Oakland Friday night to take on the Raiders. Look out for my preview later in the week! Bear Down and Happy Jay Cutler Day!