Aside from the grounded Eagles, the NFC East was separated by two games in 2012, with Washington eking into the playoffs as the division winner. In 2013, these teams are proving extremely difficult to put a finger on. Are they all that good? Or just that middling? Let’s run through some predictions! (This might be an exercise in NFL futility.)

It’s hard not to like Washington if RG3 is healthy the whole season. However, as that’s unlikely to happen, it prevents me from buying into them all the way. This prediction is based on the idea that Griffin will play 14 games. If Kirk Cousins has to start more than two games, Washington’s record will take a hit. I know we’ve all been blowing Cousins this offseason, but he’s still a back-up quarterback that we’ve barely seen. (He’s probably got more game action than Matt Flynn though.) Griffin is an extraordinary talent that can’t be heavily reined in, because he won’t let it happen. He’s going to run the ball when he deems it necessary. But Washington really needs his deft skills as a passer if they’re going to repeat their 2012 success. 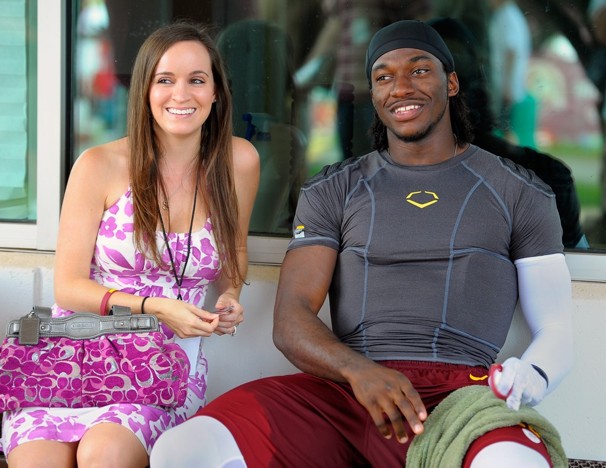 Trent Williams is coming into his own as a left tackle, one of the stalwarts on an otherwise average line. Where Washington is lacking is at wide receiver. Santana Moss is exceptional… if we’re in 2006. Pierre Garcon was injured most of last season and didn’t live up the fat money Daniel Snyder paid him. (It took me a while to work in a Snyder jab.) So aside from tight end Fred Davis, where is Griffin going to aim his throws? Washington, as they did last year, will rely on their dominant running game to bowl over opponents. Alfred Morris can be penciled in for 1,200 yards, but I wonder how many carries Griffin and a healthy Roy Helu will subtract from his total? In any case, the formula for Mike Shanahan’s offense is the same as its always been. Run the ball effectively and create opportunities down the field with the play-action pass.

Bringing back DeAngelo Hall was probably the best move of the offseason, and that’s saying quite a bit. Hall is necessary for this secondary since he does manage to make an interception once every four games. Washington can’t just throw away players that create turnovers. That being said, he’s way overrated. The real lift on defense will come in the form of Brian Orakpo. Washington’s premiere pass rusher missed all but two games in 2012, leaving them without any real threat coming off the edge. His presence means the corners don’t have to play five seconds in coverage before hoping the defense gets to the quarterback.

I know. Too easy.

It’s a year after a disappointing Giants season, so clearly they’re going to win the Super Bowl, right? Maybe if Tom Coughlin keeps “easing up on his veterans” or has more committees (or some ridiculous BS like that) they’ll get back to the playoffs! Last year Eli Manning had a “meh” year. He was close to 4,000 yards with a 59.9 completion percentage (which is actually higher than his career average of 58.6), but only carried a quarterback rating of 87.2. Wow. There were way too many stats in that sentence. Who am I, Matthew Berry? Eli’s always going to be an average quarterback that ramps it up in the clutch. He just needs help in getting there sometimes.

Like clockwork, the Giants are already dealing with several key injuries. Receiver Hakeem Nicks’s nagging groin/back/life problems are affecting his cuts and speed, something he didn’t have a lot of to begin with. Victor Cruz looks healthy after rehabbing a bruised heel, but I feel like it’s a matter of games before something comes up. Not having Andre Brown at running back for the early portion of the year won’t help Manning’s case, either. (And second year pro David Wilson likes to fumble that rock, gurl.) The Giants broke their own “no lineman should be drafted early” philosophy by selecting Justin Pugh, their new right tackle. I don’t like the Giant running game, but the receivers (along with Reuben Randle) are good enough to separate from coverage and move the sticks.

And now we get to the awkwardness that is the G-Men’s defense. Their front four is still intimidating with Justin Tuck and Jason Pierre-Paul at the ends. Cullen Jenkins and Shaun Rogers are in a healthy defensive tackle rotation. The linebackers are… decent. Keith Rivers is a fine strongside ‘backer, but not a major play-maker. Dan Connor overtook Mark Herzlich for the middle LB job, but comes with some injury issues. To me, the Giants simply don’t have a secondary capable of keeping the team in the shoot-outs they’re invariably going to get into. They already lost promising safety Stevie Brown for the season with an ACL tear. Prince Amukamara hasn’t shown me he’s completely ready to be a number one corner, and Corey Webster is nothing exemplary. They will be torched, even with Antrel Rolle patrolling the defensive backfield.

Bland, unpredictable, and injury-prone. That gets you to 8-8. 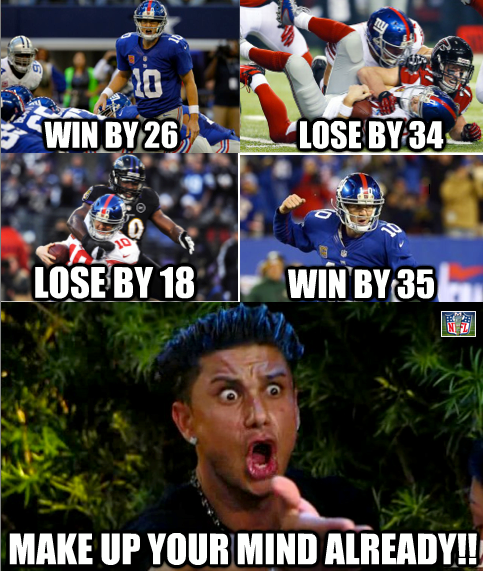 Head coach Jason Garrett will no longer be calling the plays on offense, giving up that role to Bill Callahan. So now he’ll have no excuses for mis-managing timeouts and the game clock. Callahan’s play-calling looked sharp in the preseason, as did Tony “King of Regular Season Clutch” Romo. The sideshow QB always manages to perform in the regular season and put up nearly 5,000 yards last year along with his 28 TD’s. He can stat-pad with the best of them, but this Cowboy team doesn’t seem to want to be “led.”

Dez Bryant will flip on his beast mode this season. Garrett has even proclaimed Miles Austin to be 100% and ready to return to form. There will be no more Felix Jones coming out of the backfield, however, as he left for the Eagles (and was traded to Pittsburgh). So once again DeMarco Murray is the face of a running game that ranked 31st in 2012. Woo. I know Callahan likes running the ball, but it’ll be difficult to stick with something that doesn’t work. Ever.

Without Rob “Wolfman” Ryan growling on the sidelines, we may actually get to see what the Dallas head coach looks like! (‘Cause I’m pretty sure everyone forgot Garrett was a ginger.) Garrett (or Jerry Jones, really) brought in Monte Kiffin to run his Tampa-2 scheme, which is a major change from their old 3-4 system. This means DeMarcus Ware is shifting to defensive end, which could be where he’s suited best. He’s larger than your typical 3-4 outside linebacker. Jay Ratliff is starting the season on the PUP list, putting a large-man-sized hole in the middle of the Cowbots newly structured defensive line. Brandon Carr and Morris Claiborne are each solid tacklers, a trait necessary for Kiffin’s defensive system. The Cowboys are still weak at safety, so look out for mis-reads and lost coverages down the field.

As always, these Cowboys have talent. This year, the talent will seep in. Sorta. 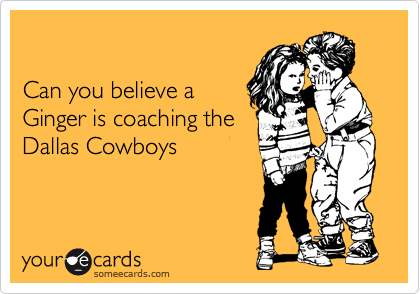 Chip Kelly has strode into town, touting his “freaky fast, freaky good” Oregon offense all along the way. I’d be lying if I said I thought this was a fantastic idea. Kelly’s offense will lend itself to very quick 3-and-out’s, which means his defense, which isn’t all that defensive, will be constantly on the field. The Time of Possession stats are going to be very interesting. And with Michael Vick beating out Nick Foles for the starting QB job (a silly test more than an actual competition), I expect to see “freaky fast” turnovers as well. Vick just can’t manage an offense like this over a lengthy period of time.

Lane Johnson was selected fourth overall in this year’s draft and instantly upgrades the line at the right tackle position. Zach Ertz, perhaps the second best tight end in the rookie draft class, provides desperately-needed depth behind Brent “Might Still Have a Concussion” Celek. Losing Jeremy Maclin for the season with a torn ACL hurts for two reasons, the first being that Maclin is a dependable and dynamic receiver. The second reason is that is puts more pressure on DeSean Jackson to not be an ass-clown. (Which he is, by the way.) LeSean “Shady” McCoy is being hyped as a fantasy league gem, but Kelly will mix in runs from his other running backs as well as Vick.  And let’s not forget this team still has Riley “I’m Racist but They Need Me” Cooper on it. This guy will have a target on his head all season, whether it’s real or just imagined.

Philly spent a lot of money in the offseason signing a load of veteran free agents to shore up their defense (sounds familiar…). Cary Williams was signed from the Ravens to be their second corner (and an irritant). DB Bradley Fletcher and safety Patrick Chung were picked up as well, completely revamping the secondary aside from strong safety Nate Allen. Isaac Sopoaga comes from the 49ers to anchor the middle of the Eagles’ 3-4 defensive line. End Fletcher Cox can only benefit from Sopoaga’s blocker absorption. Pass defense wasn’t Philly’s problem in 2012, however. They were gashed frequently on the ground, giving up a touch over 126 yards a game. Connor Barwin and DeMeco Ryans can put tackles in their stat box, but run defense is all about gap control and containment. The Eagles need to show they’re more disciplined under new coordinator Billy Davis.

I’m not buying that this offense (as it’s being installed in Philly) can work in the NFL over the course of a season.

Honestly, does anyone else feel this division is an utter crap shoot? Despite my logical arguments, I have no idea what the hizell is going to happen in this division. Good luck predicting it. I don’t think any team in this division will be terrible, but like the AFC North, they’ll kick the crap out of each other and prevent any 11 or 12 win records.

Keep coming back for more NFL Predictions! Click the tag below to find all of them in one place!