There’s a lot of youth in the AFC South. Quarterbacks with barely a season’s worth of starts are being called on to lead their rebuilding rosters against the dominant Texans and the rest of the AFC. Indy surprised us last year with their entrance into the playoffs, but can they repeat that success? Will Jacksonville avoid eight home black-outs? These are among the questions I’ll try to answer in this division preview!

Slowly but surely, the Texans have been creeping towards fulfilling their seasons of overhype. Last year, when Matt Schaub was actually healthy for the playoffs, the idea that he wasn’t capable of leading them to a title took form. Schaub isn’t an exceptional QB, but I’d say he’s still above average. He’s best when Arian Foster is gaining yards by the truckload (what QB wouldn’t be?), but the running back has been dealing with nagging injuries. Foster might not be 100% at the start of the season, but the Texans have Ben Tate behind him, who could start for several NFL clubs. Houston drafted receiver DeAndre Hopkins to help take some of the pressure of Andre Johnson. Hopkins had a nice preseason, but it’s go time now. Tight end Owen Daniels gives Schaub a large target, one that was thrown to 103 times last season. Daniels must convert more of those into catches if the Texans are going to move the chains through the air.

For D-coordinator Wade Philips’s unit, it’s all about staying healthy. J.J. Watt is the best player in the league outside of Aaron Rodgers, but he was a one man crew in the playoff run. Linebacker Brian Cushing’s absence was crippling to the Texans’ interior pass coverage. Corner Jonathan Joseph was dealing with a groin injury in the postseason, hampering his effectiveness. And signing Ed Reed could be a swell idea, if he can get on the field and remain there. With Danieal Manning at the strong side, Reed could free-ball a bit and provide some big plays for a Houston defense that was sorely lacking.

The division is still theirs for the taking.

Last year was a confluence of crazy happenings for Jim Irsay’s Colts. They drafted quarterback Andrew Luck, but saw their head coach Chuck Pagano diagnosed with leukemia just as the season was getting underway, leaving Bruce Arians to the reigns. They made it to the playoffs, where they were unceremoniously ousted by the eventual Super Bowl Champs. As free agency began, they made splashes by signing average/decent players to lucrative/loony contracts. Adding guard Donald Thomas and tackle right tackle Gosder Cherilus will keep the offensive line from being a complete travesty while rookies Hugh Thornton and Khaled Holmes develop. They signed running back Ahmad Bradshaw, but he’s already injured (but forced off the PUP list by league mandate). Darius Heyward-Bey gives Luck a speedster on the outside, but one whose ceiling has already been reached. They still needed another weapon on the outside aside from the aging Reggie Wayne and the developing but dynamic T.Y. Hilton. Coby Fleener needs to take another step forward in his progression as Luck’s safety blankie.

Defensively, they overpaid a few players that may not really fill the holes in their 3-4 scheme as well as they would like. Erik Walden isn’t a great option as an outside pass rusher. He had only three sacks in 2012, and that’s playing opposite Clay Matthews, who got all of the attention in Green Bay. Signing LaRon Landry will give them a stop-gap at the safety position. Bjoern Werner, their first round pick, has the kind of non-stop motor Pagano loves. He might not have the finesse moves of the departing Dwight Freeney, but he should be in the backfield often. The Colts’ roster isn’t stacked on that side of the ball, so Luck will be called on to win high-scoring affairs.

The Colts might actually be a better team with an elite offense, but they’re not surprising anyone this season.

Also not surprising? How much I hate this beard.

Is third-year QB Jake Locker the man for the job in Tennessee? It’s high time we found out. There are certainly weapons for Locker to play with, namely Kenny Britt, Nate Washington, and Kendall Wright at receiver. Jared cook left in free agency, leaving a hole at the tight end position which was partially filled when the Titans signed ex-Niner Delanie Walker. (Who might have some gun issues.) But the offense could/should be better, as long as Locker is better.

Running back Chris Johnson is poised to have a decent year, but a random long run in the preseason shouldn’t give fans reason to think 2,000 yards are coming. Shonn Greene, epitome of mediocre, was signed to be C2JKMF’s back-up. Yeah, Johnson and his megabucks weren’t a fan of that. Johnson’s offensive line was massively upgraded in the interior with the signing of left guard Andy Levitre and the drafting of right guard Chance Warmack. Now maybe there will be holes inside as well as outside! (Like Johnson would go up the middle. HA.)

Tennessee’s defense used to be known for its nastiness and pass rush under Jeff Fisher. However, it has lost its identity and doesn’t have much in the way of real talent. In 2012 the Titans ranked dead last in points allowed per game. That doesn’t just change overnight because you…signed safety Bernard Pollard. Yeah, that locker room cancer that can’t stay on a team for more than two seasons. And I have no idea how that line is going to get to the quarterback, outside of the occasional Kamerion Wimbley rush.

More Middle of the Road for Titan fans.

Ugh. Am I really about to spend two-three paragraphs talking about the goddamn Jaguars? Aside from the Raiders, I’m not sure any team has a worse outlook than this sorry bunch. Their talent pool is so shallow that Blaine Gabbert was in a QB competition with Chad Henne. Yeah. That Chad Henne. The Jaguars severely lack talent. They drafted Luke Joeckel to be their eventual left tackle, but for right now he’s going to be starting on the right side of the line. WR Jordan Shipley should add some youth and consistency to an aching receiver unit, but it’s not enough to propel this offense. The Jaguars are going to struggle to put up points again this year, even with a marked improvement from Justin Blackmon. If used correctly, former Michigan QB Denard Robinson might be an actual offensive play-maker. That’s something the Jaguars desperately need if they’re to A-compete and B-sell tickets. I’m not sure they’ll do much of either.

Jacksonville might rate as high as “not horrendous” on the defensive side of the ball on 2013. John Cyprien was one of the better safety prospects in the draft, and they selected him to be their starter on the strong side. While that means the back-end will be (hopefully) better, the Jags still were one of the worst run defenses in football. One strong safety won’t change that. Geno Hayes, Paul Posluszny and Russell Allen are mediocre linebackers. Not upgrading that unit will prove to be an issue.

I’m giving them a one game improvement because I’m feeling nice. (I’ll prolly regret that.) 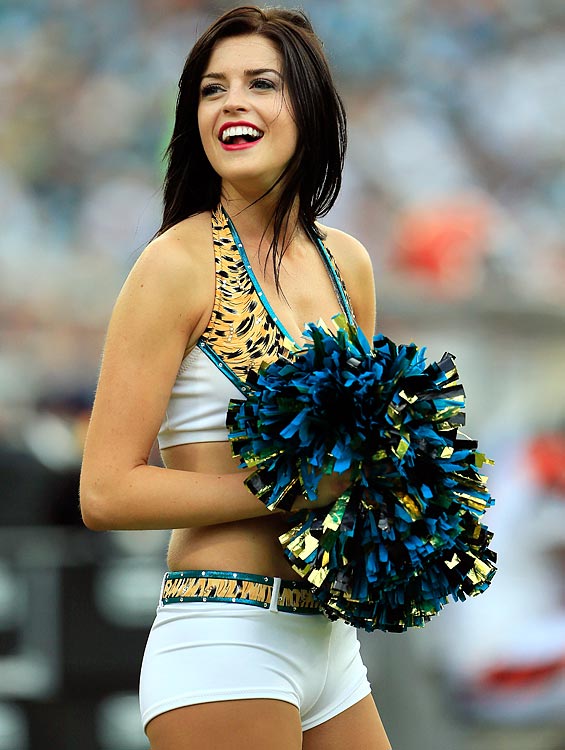 I do NOT regret posting this picture. (Of a cheerleader whose identity remains a mystery to me.)

Booyah. Not a lot of change in the rankings of the AFC South, but the teams aren’t going underneath a drastic overhaul either. Have fun Texans.

Check back soon for more regular season predictions! (Click the “NFL Predictions” tag below to find all the relevant posts. You’re welcome.)