The AFC North has always been know for tough, hard-nosed teams that play defense and grind out wins. In 2013, this division is also home to the Super Bowl Champion Ravens, one of two AFC playoff teams to come out of the north. With the changeover in Baltimore, is this the year things finally shake up for Cincy’s benefit? Or can the Steelers avoid completely rebuilding? And are the Browns ready to take the step forward everyone is waiting for? Time to dig deep!

The Ravens had the most transactions/changes I can remember from a Super Bowl Champion. Usually there’s an inclination to keep a title team together and try for it again, but Ozzie Newsome wasn’t waiting for this to get old on him. Ray Lewis retired. (And subsequently ruined ESPN for me.) Ed Reed walked in free agency, as did Dannell Ellerbee and Paul Kruger. Newsome also traded away Joe Flacco’s most trusted receiver, Anquan Boldin. Oh, and tight end Dennis Pitta, who would have been Flacco’s next favorite target, is IR’ing it up (with the designation to return). Oh swell.

Well the Ravens won their title, and now they have their $20 million a year quarterback. Everyone should get ready for the internet blaze that should will be set when Flacco reverts to his regular season self. Here’s a sample stat line if Flacco doesn’t hit a downfield throw in a given game: 11/23, 127 yards, 1 INT. THAT’S RIGHT, PAY THAT MAN. I know the Ravens didn’t have much of a choice, but I’m not a Flacco-fan. His regular seasons have been very inconsistent, and a few postseason games won’t change that for me.

Flacco has one of the best downfield throws in the NFL (if you like a lot of pass interference calls), and most of them are aimed at Torrey Smith. Smith is about as much of a one-trick pony as you’ll see in the league, but it’s still a pretty good trick. Newsome brought in a pair of ex-Manning weapons in tight end Dallas Clark and receiver Brandon Stokley, both of whom are past their prime. Ray Rice will still catch a ton of balls coming out of the backfield, but he’s going to share carries with Bernard Pierce. (Probably a 3-1 ratio or so.) Vonta Leach will be leading blocks for those runs and he’s one of the best fullbacks money can buy.

Baltimore reshuffled their offensive line towards the end of last season and discovered a Super Bowl winning combination. Bryant McKinnie was re-signed to be their left tackle (after drawn out negotiations), which puts him back next to guard Kelechi Osemele. That dude is all sorts of nasty. Mashal Yanda and Michael Oher form the formidable right side of the Ravens’ line.

Despite all the losses, Baltimore made a few moves to re-load on the defensive side. Signing DT Chris Canty to be a 3-4 defensive end could be one of the more underrated moves of the offseason. Elvis Dumervil was lured away from the Broncos after an awkward faxing situation (seriously, screw faxes), adding a pass rusher opposite Terrell Suggs. And safety Michael Huff negotiated a fair contract to be the fill-in for Ed Reed. Huff doesn’t have the same crazy instincts, but he’s a good substitute.

No one in the AFC North can really do better than ten wins, and the Ravens are no exception.

There’s a lot of love going around the league for the Bengals, all with the same caveat. They will only go as far as Andy Dalton can take them. (Like we can’t say that about any team and their quarterback.) I haven’t put my faith in Dalton because despite his football acumen (which I think is high), I haven’t seen his ability to make all the throws in tight windows.

Dalton won’t have many excuses, especially with the arsenal he’ll have at his disposal. A.J. Green is ready to become a top-3 receiver, if he isn’t already. Tight end Jermaine Gresham hasn’t developed into the force we assumed he would, but no matter, because the Bengals drafted Tyler Eifert out of Notre Dame as yet another receiving target for Dalton. Eifert has the natural ability to work his way into whatever offensive sets OC Jay Gruden wants to run. BenJarvus Green-Ellis (“The Law Firm,” as he is called) will be the Bengals’ running back to start the year, but look for second rounder Giovani Bernard to steal come carries every now and again. Bernard is explosive as a runner and pass-catcher, something Green-Ellis lacks.

While the Bengal offense was slightly below average, their defense was in the top half of most defensive categories. They gave up only 20 points a game, good for eighth best in the NFL. Defensive tackle Geno Atkins can pressure QB’s up the middle, which forces offenses to dedicate multiple blockers for protection. Cincy’s linebackers are a mean bunch. James Harrison signed here to bring his brand of thuggery and angerball-ness. Vontaze Burfict will take another step forward in his sophomore year as he continues to be a wrecking ball. While there are plenty of “names” int the Bengal secondary, I feel like they’ll take a small step back this year. Leon Hall and Terrence Newman are both solid corners, but not the kind of lock-down defenders that take away stretches of the field. Cincy was only +4 in turnover differential, something they need to improve in order to make waves in the AFC.

I do this despite my feelings on Dalton. The team is good enough to hit 10 wins again.

Big Ben is back on the field for Pittsburgh, ready to sling it around like he just don’t care. (He probably doesn’t.) Right guard David Decastro missed the nearly the entire 2012 season with an ACL and MCL injury. He played a few games down the stretch, but is ready for a fresh start in 2013. Next to Maurkice Pouncey, DeCastro shores up a Steeler interior that has had its issues in recent years. Roethlisberger won’t have to run around for his life until he can find an open receiver… hopefully. If Ben goes down though, the Steelers have a much better back-up in Bruce Gradkowski. No more Charlie Batch/Byron Leftwich shenanigans.

Rookie running back LeVeon Bell will be rehabbing through at least the first six weeks of the regular season due to a Lisfranc fracture in his foot, which necessitated a trade for the ex-Cowboys/Eagle Felix Jones. Jones will start the regular season, offering a different type of back than Steeler fans may be used to. (He’s like, fast, and stuff.) Jones will share duties with Isaac Redman and LaRod Stevens-Howling. Losing Mike Wallace doesn’t even seem to have phased these Steelers. Well, it will when Ben’s staggering around in the pocket and can’t throw it to a streaky receiver who’s burned past the secondary. Well, Emmanuel Sanders should be that guy, but I’m interested to see what happens when he’s a full-time starter. He snagged 44 balls in 2012, which isn’t enough for a number one or two receiver. Heath Miller is bothered by a knee injury that could sideline him for a few weeks early on, but back-up Matt Spaeth is on IR/DTR (eff that acronym). What remains at tight end is inexperienced depth.

The Steeler defense is the same as its always been, thanks to the ageless Dick LeBeau. James Harrison left for the Bengals, leaving Jason Worilds to start as outside linebacker. He’s really holding down a spot for first rounder Jarvis Jones, who should find his way into that role before the season ends. There may not have been a better player/scheme fit than that of Jones and the Steelers’ 3-4 defense. He’s a smaller outside linebacker that can get pressure off the edge. Other than that change, the defense that was first in passing yards and second in rushing yards is intact. Obviously the key is Troy Polamalu, who adds such a dynamic, ball-hawking element to this unit. Without him, the Steelers have trouble forcing turnovers. Ryan Clark has developed well at the other safety slot, improving a secondary with the returning Ike Taylor at corner.

How’d that happen? Oh yeah, I can’t actually say the Steelers got a lot better. They might grind this season out.

You should all fucking congratulate me. I just got through an ENTIRE Steelers preview without making a SINGLE douchebag/motorcycle/bathroom-stall joke about Ben Roethlisberger. I AM A SAINT. 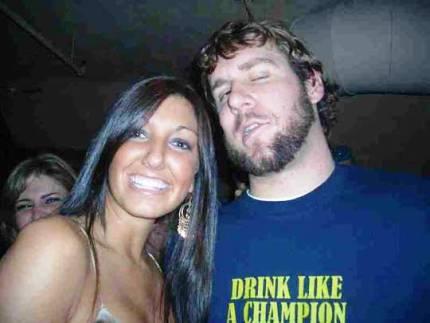 Dammit. I’m sorry. That picture sneaks into these previews every year like a stealthy snow leopard. (A snow leopard I lure with promises of Man Flesh. Maybe. Who knows?)

Hey everybody! Who’s ready to roll into the playoffs with a 29 year old quarterback? …Oh, he’s only in his second year of the NFL? Hell. As awkward as Brandon Weeden looked in 2012, I’m willing to blame some of that on his being a poor fit in Pat Shurmur’s west coast-ish system. Head coach Rob Chudzinski and offensive coordinator Norv Turner favor a more in-the-pocket style QB with an emphasis on a dependable running game and down the field throws. This plays into Weeden’s strengths and gives the Browns offense a chance to do something worthwhile.

Weeden will be supported by a ground attack that features Trent Richardson, who will be a workhorse for the Browns. (But a stat line of 25 carries for 94 yards won’t be enough for this team anymore.) And it’s taken a while, but the Browns finally have a pair of receivers in Greg Little and Josh Gordon that defenses actually have to worry about. I worry that Richardson will wear down over 16 games again, but Turner’s play-calling should hopefully avoid that situation.

This Browns defense is actually… good. Jabaal Sheard is only getting better at outside linebacker, and now he has the recently-signed Paul Kruger on the opposite side to draw blockers. Kruger’s nine sacks in 2012 earned him a sweet contract and the opportunity to “headline” a defense. And when he finally gets on the field, defensive end Barkevious Mingo will create all kinds of havoc. Joe Haden is an excellent cover corner but also has the physical presence Cleveland needs in its secondary.

The Browns don’t even have cheerleaders!! What am I supposed to show you guys? Oh well. Here’s to “moral victories.” But seriously, the Browns should be on the rise. (Next year, mostly.) 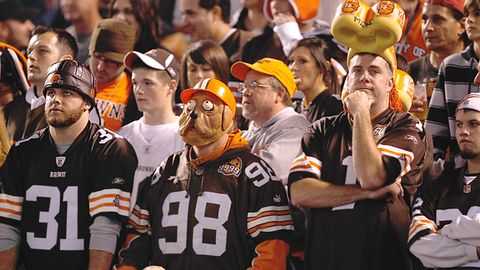 I really hate that mask.

With two predicted 10-6 records in the division, someone has to win. And I’m going with the Bengals to come out on top. How about THAT for a little change-up! (I mean, it was necessary. I barely changed anything in this division.) 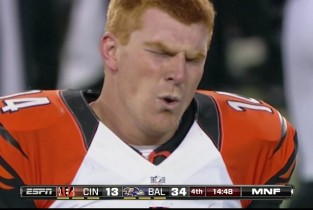 Keep checking as the predictions will come fast and furious! (Sans The Rock.) Click the handy “NFL Predictions” tag below to track all the posts!