Did everyone keep their lunches down? It was an unsettling game on Sunday afternoon, but the Chicago Bears gutted out a second straight home win against the division rival Vikings. Let’s get this Gameday Review started and see how it all went down! 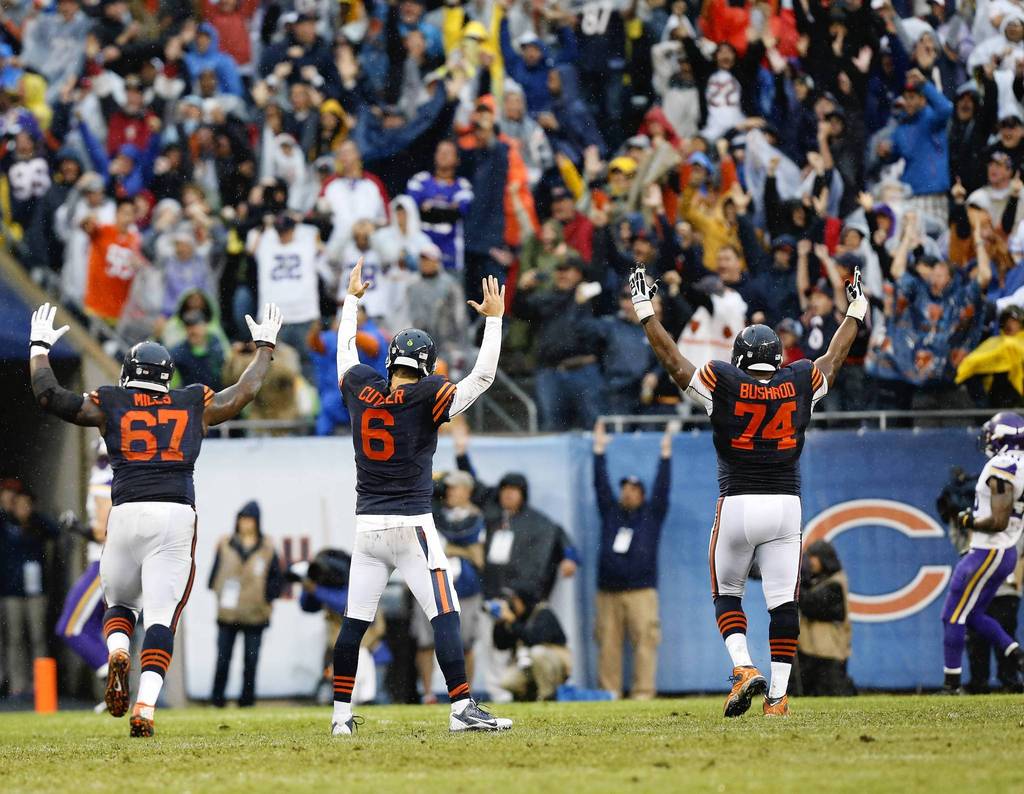 Sunday’s divisional match-up had a foreboding beginning, as Cordarrelle Patterson returned the opening kickoff 105 yards for the Tee Diddy, putting the Vikings up 7-0 without Adrian Peterson ever hitting the field. Not to be outshone by the rookie Viking, Devin Hester pumped up the crowd from his endzone and ran it back 76 yards, setting up the Bears with excellent field position. Three runs (including a 24-yard gain) and a catch from Matt Forte set the Bears up at the one yard line, where Jay Cutler found Martellus Bennett, tying the game at seven.

Despite the terrible turnovers, the offense gave us some highlight plays and showed a lot of efficient play-calling. On their second touchdown drive, an end-around by Alshon Jeffery netted 38 yards. That was outdone by the next play, a gorgeous pass from Cutler over double coverage to Brandon Marshall, who pulled in the 34 yarder for the score. As we all assumed going into the season, Matt Forte was a heavy facilitator for the offense today. His 71 receiving yards and 90 rushing yards followed the gameplan precisely. It wasn’t an utterly fantastic game for Forte, however. He was stripped by Letroy Guion while going to the ground, a fourth quarter turnover that nearly had disastrous consequences.

The second quarter is where the game got… frustrating. On a drop-back on third and long, Cutler was strip-sacked by Jared Allen. Picked up by lineman Brian Robinson, the ball the was returned 61 yards for a touchdown. All of a sudden, the game was tied again. After an 80-yard return from Hester on the kickoff, Chicago drove down yet again to the red zone, where four straight runs gave the offense first and goal from the one yard line. Instead of punching the ball in with ONE yard to go, Trestman called a pass, which Cutler flatly tossed over the middle of the goal line. It was tipped, bounced in the air and landed in the hands of DT Kevin Williams. Tim did his best to overcome the Williams interception with a boomerang of Christian Ponder, running it back 44 yards to paydirt.

During some FOX broadcasting issues (there were a lot of them today), Adrian Peterson got his longest run of the day, a 36-yarder up the right side of the line. Then Ponder found tight end Kyle Rudolph for a twenty yard touchdown. At the end of the first half, the Bears benefitted from a Viking unnecessary roughness penalty which set them up at their own 36. Catches from Earl Bennett and Marshall drove the Bears down to the 2 yard line, where the Bears ran three straight passes (due to only having 11 seconds left on the clock), only to see them all fall incomplete. A Robbie Gould field goal put Chicago up 24-21 going into the break.Trestman’s team dominated their opponent in first half in nearly every major category, but only had a three point lead to show for it.

The second half saw more craziness ensue. There was a fourth down conversion that was essentially erased with a subsequent strip of Peterson, but Chicago couldn’t capitalize on this mistake on the next drive, punting instead. On his next series, Jay did exactly what I said in the preview that he couldn’t do, which was a deep throw down the right side of the field that Harrison Smith was waiting to pounce on. The turnover near the goal line killed yet another Bear drive.

Mel Tucker’s defense clamped down on Adrian Peterson as much as they could, holding him to less than four yards a carry on the afternoon. Aside from the strip, the Bears corralled Peterson into a 13-yard loss during the fourth quarter, taking them out of the red zone. That forced a field goal and kept the score close enough for Chicago’s offense to strike, even after another Viking field goal.

A holding penalty on guard Matt Slauson nearly derailed the last drive, but Jay Cutler was not to be denied.  His pass to Martellus Bennett on the sideline was delivered with pinpoint accuracy to the tighr end’s outside shoulder, letting him make a tremendous catch and dive toward the endzone. To seal the deal, special teamer Blake Costanzo ripped the ball away John Carlson on the ensuing kickoff, bring Cutler back on the field for a victory kneel-down. Thatta boy Jay. His 28 completions for 290 yards and three scores were the difference today.

-Uh, that muffed return that ended up being kicked into the back of the endzone for a touchback? I’m still confused.

-Did anyone else see that Wisconsin commercial featuring Jordy Nelson of the Packers? Don’t worry, I found it.

-It was great to see Hester play his role in this one. He changed field position often with lengthy run-backs, altering the Vikings’ plans for kickoffs and punts.

-Maybe four turnovers are a little much, eh offense?

This win marks two comebacks in a row from Marc Trestman’s Bears. Jay Cutler fought back through all the BS and ugly turnovers to lead this team to victory. And he did LEAD them. If you’re raging on Jay for the interceptions, then you have to give him credit for the game-winning play as well. Perhaps the Bears team of last year wouldn’t have been able to rally from such a deficit, but this one did. And now they’re 2-0. Which means that thanks to the Lions’ loss today, they’re alone in first place in the NFC North.