Last year, I broke up with the NFL. It was one of the best decisions I’ve made in my life (tied with giving up caffeine) and I haven’t regretted it for a second. With the NFL season’s first full day of action coming this Sunday, I thought it would be helpful to educate you on just a few of the things you can do instead of watching this sport of men literally hurling themselves at each other.

Try Making That One Recipe

You know, that one pesto chicken recipe your mom gave you but you’re too lazy to actually try. Hell, over the course of a three hour game you could go to the grocery store, buy all the ingredients, come home, prepare, and eat said food and probably still have time left over. And isn’t food worth missing anything else for? I’d skip a baby birth for a good smoked brisket.

This is something that everyone needs to do more often. I just want a bunch of blankets and pillows in my living room to look like a medieval king’s traveling tent, is that too much to ask? You could even build it Saturday night, sleep there, and spend Sunday lounging amongst the ruins. Because you’ll definitely mess everything up with your toss-filled sleep and wake up wrapped in everything imaginable. 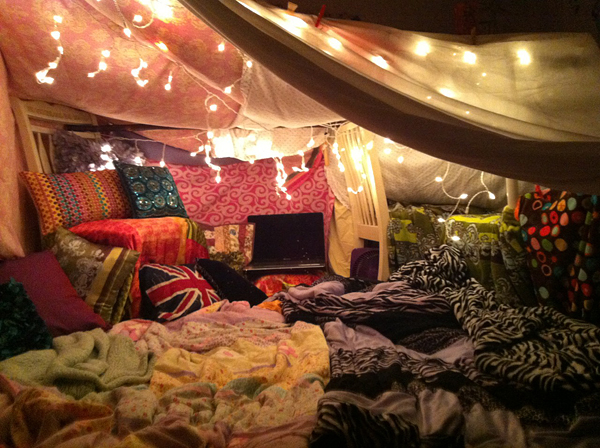 Right? We all want to do this.

Learn to play the Dulcimer

You might be asking me “But Joe, why the dulcimer? Surely there are other instruments I can learn.” NO. NO OTHER INSTRUMENTS ARE ALLOWED. Just listen to this soothing melody and tell me some other shitty combination of wood and string is worth your time. (This is actually a hammered dulcimer, something I didn’t know even existed. SEE MOM, I LEARNED TODAY.)

If you spend three hours a week practicing, you could be a dulcimer expert by the time the Super Bowl rolls back around.

Clearly the healthiest use of your time. You’ll be sweaty and gross when you’re done (just like if you watched football on your couch and stuffed your face with smoked meats), but you’ll feel good about yourself instead of horribly embarrassed.

Then again, we have a cat. Best not to work out at all. Playing video games is way safer.

If you’re waking up “early” on Sunday’s to watch your dose weekly dose of football, don’t. Just lay back down and get more quality time with your sheets. Even a mere hour nap can do wonders for you. Especially during that second Sunday game. That was PRIME nap time for me during my 11-hour Sunday pigskin-watching sessions.

Your average WWE pay-per-view event is around 2:45, well short of an average NFL game. So if you’ve got the WWE Network (which you absolutely should if you’re a wrestling fan), pick a classic event and have yourself a blast! Just last night I took a look at 1998’s King of the Ring, where an epic moment was born.

Seriously. That’s so much more entertaining that watching the Steelers go three-and-out.

You’re watching TV anyway, so why not? Watching the NFL means you have less time to catch up on your DVR or finally get through whatever Netflix series you’ve been attempting to binge. This is obviously an efficient use of your time.

You should be doing this anyway, not even joking. Just turn off the TV, put some music on, and whip out that Swiffer duster and go to town.

You remember what those are, right? Correct, it’s that thing you can download on your iPad. Work your brain! Use your imagination! Avoid the moving pictures!

There. You’re now ready and able to get through the entire NFL season without actually watching any of it. God speed Padawan. If you don’t mind, I need to find a maid’s outfit.